St JOHN WALL Although born in Lancashire in 1620, his parents had moved from Aldeby in Norfolk.

In 1633 he went to school in Douay, and then to English College in Rome where he was ordained in 1645.

He later joined the Franciscans in Douay before eventually returning to England for good in 1656 where he spent most of his time in the Midlands working as an itinerant missioner. He was finally captured at Rushock, not far from Harvington, and was eventually sentenced to death for being a priest. He was hung, drawn and quartered at Red Hill, Worcester on 22nd August 1679. Canonised 1970. 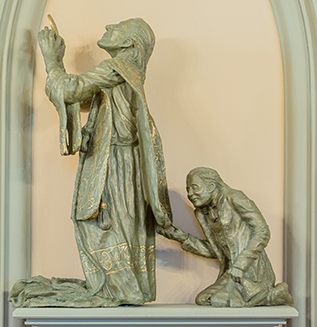 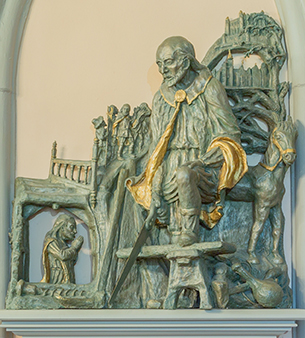 St NICHOLAS OWEN Born in Oxford about 1555. He was apprenticed to his father, a carpenter. In 1588 he became the servant of Fr Henry Garnet, the Jesuit superior in England and for seventeen years was employed in making secret hides for priests and church materials including some of those in Harvington Hall. He was arrested for the second time at Hindlip House and died under torture in the Tower on 2nd March 1606. Canonised 1970.