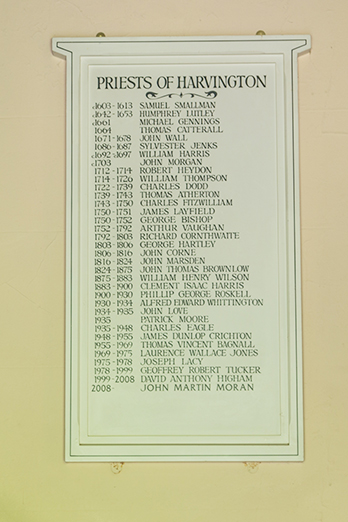 Mgr. John Moran was appointed Parish Priest of St. Mary’s, Harvington in 2008 until his retirement in 2021. Fr John continues to serve the parish as ‘Priest in Residence’. 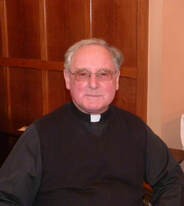 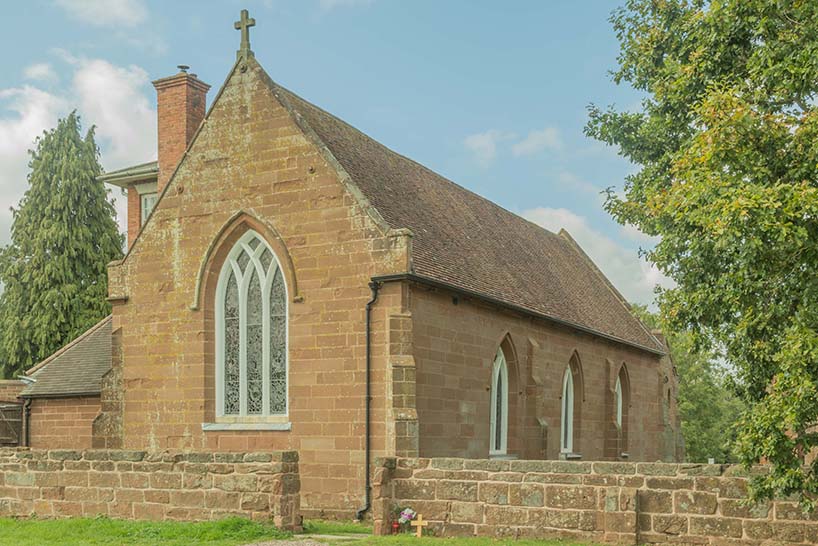 The church was built in 1825, four years before Catholic Emancipation. It is the earliest Catholic church in the district, pre-dating the Catholic missions of Stourbridge and Kidderminster by a few years. Before the church was built, Mass was said at Harvington Hall. There is an earlier chapel within the Hall and the Georgian chapel in the grounds.

Looking up above the front entrance of the church is the recently installed sculpture, ‘The Annunciation’ made by the former parishioner Gabrielle Mercer. The design incorporates two kneeling figures one of Mary and the other of the angel Gabriel, above them is the dove representing the Holy Spirit. The Annunciation becomes the “gateway” leading us into the Incarnation at the beginning of the whole mystery of Salvation. It also means that through this event, The Annunciation, we are able to receive Redemption and entry into Christ’s Kingdom. 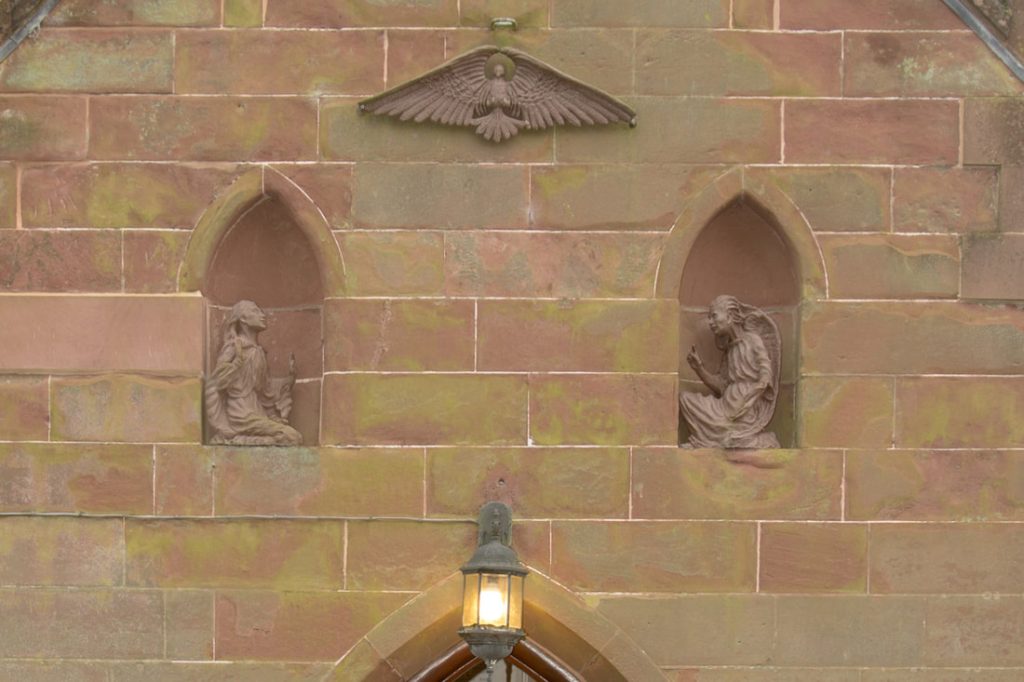 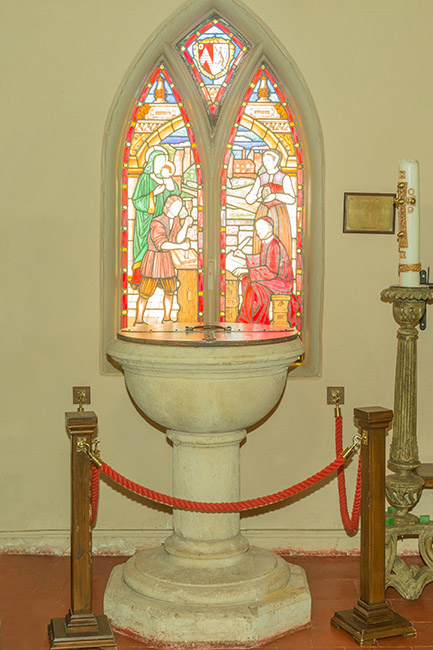 On entering the church, the stained glass window on the right, brings colour and light to the vestibule area. The window is dedicated to the deceased members of the Mulroy and Hague families. It depicts St Anne, the mother of Mary, holding the infant Jesus. Beside her are St. Margaret Clitheroe, Saint John Henry Newman and St Nicholas Owen against a background of Harvington Hall.

On proceeding to the main door, on the left, is the bronze relief of the Shrine of St. John Wall by the artist Faith Tolkien. The bronze depicts the saint disguised as a layman in the 17th century, in reality a hunted priest. In the background of the work is Harvington Hall and as St. John Wall was a Franciscan priest, the link is made with St Francis’s love of nature. The Worcestershire apple tree is behind him and he is surrounded by animals- a sheep, ducks, geese, a wagtail, a nuthatch and a dove. 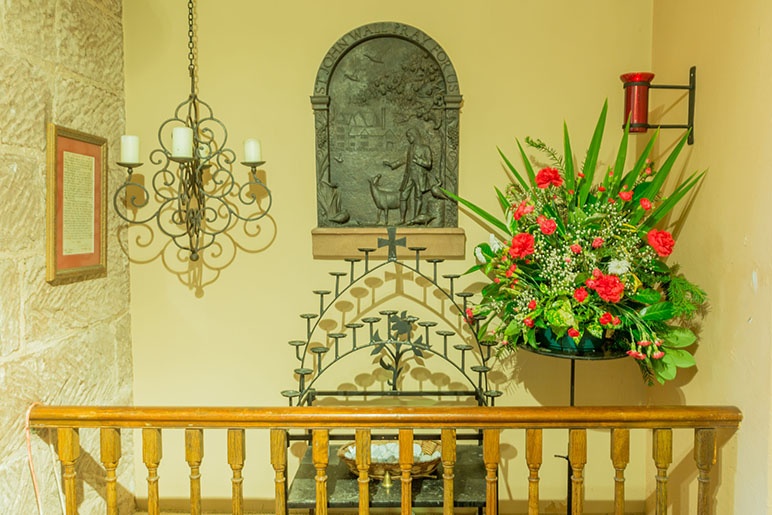 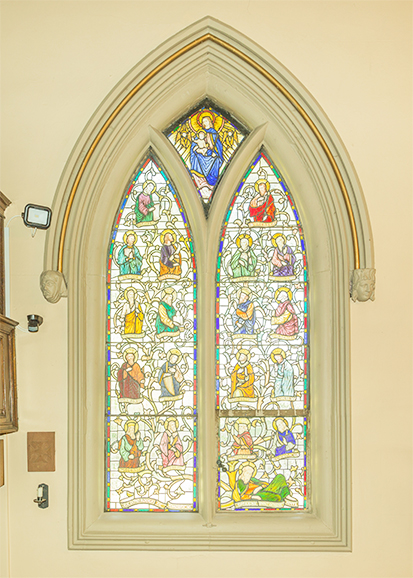 On entering the nave of the church, on the left is a stained-glass window depicting the Tree of Jesse. The Tree of Jesse is a depiction in art of the ancestors of Christ shown in a tree which rises from Jesse of Bethlehem, the father of King David.

The next window shows the life of Mary. 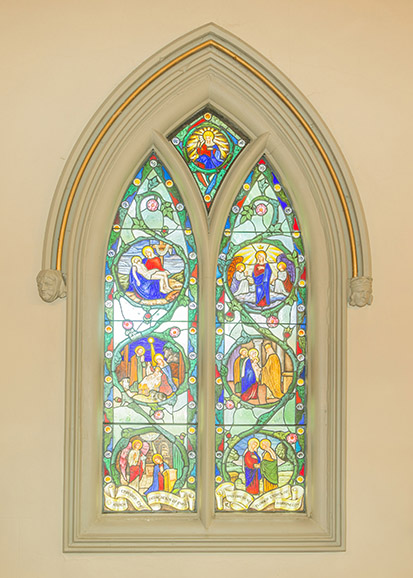 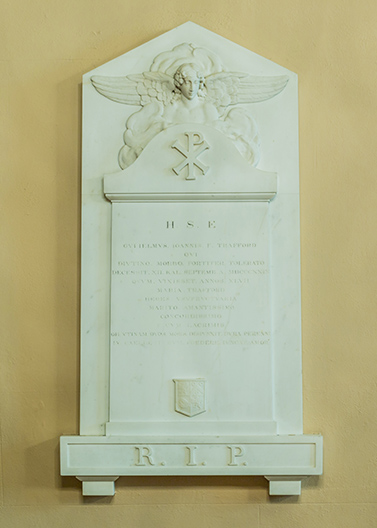 Proceeding along the wall are two memorials dedicated to the memory of the Traffords, local Catholic landowners, who lived once at the house called Pleremore. 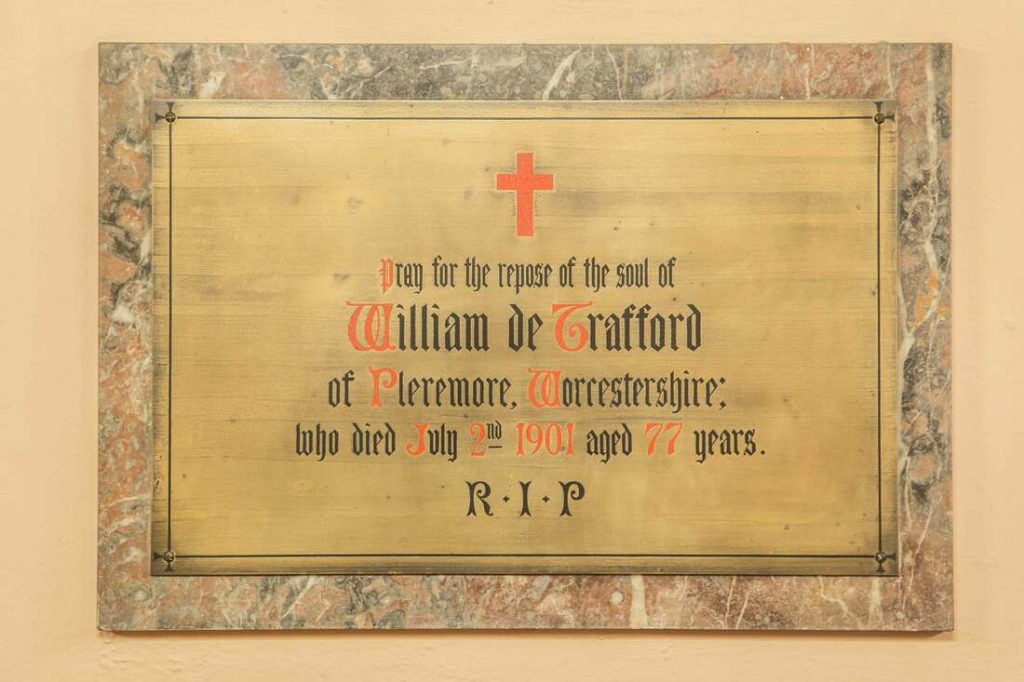 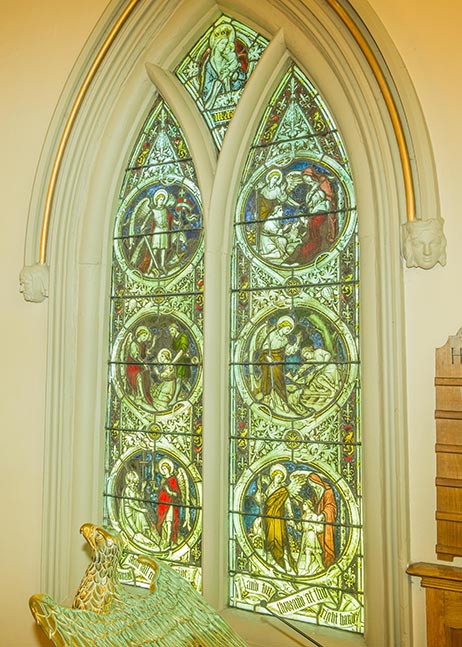 The stained-glass window on the side wall near the lectern honours the angels Raphael and Michael. The archangel Michael has the traditional military appearance. Much of the window depicts the angel Raphael, showing the Old Testament story of Tobias and the Angel, including the dog and the fish, as recounted in the Book of Tobit. This window was donated by Mrs Mildred Watts of Sion House in 1920, in thanksgiving for her two sons having come safely through the First World War.

The magnificent stained-glass of the window  above the altar was erected in 1893 in memory of Charles Austin Spink by his widow. The window represents the patron saints of the Spink family. They are St. Charles Borromeo, St. Augustine, St. Joseph, St. Anne, the mother of Our Lady, St. Edward and St. Elizabeth of Hungary.

These saints surround St. Mary, patroness of the church, who presents the infant Christ to the world. Sixty years later, the three lower panels of the window were altered in memory of Humphrey Watts. The saints added are St. Thomas More in the centre, St. John Wall on the left and St Humphrey Middlemore on the right. St Humphrey Middlemore came from Edgbaston, and his mother was Margery Throckmorton. Finally, in the 1970s the lowest three panels of the window (a rose and a fleur-de-lys) were added by Fr. Joseph Lacy and Mrs Janet Arbuthnot. 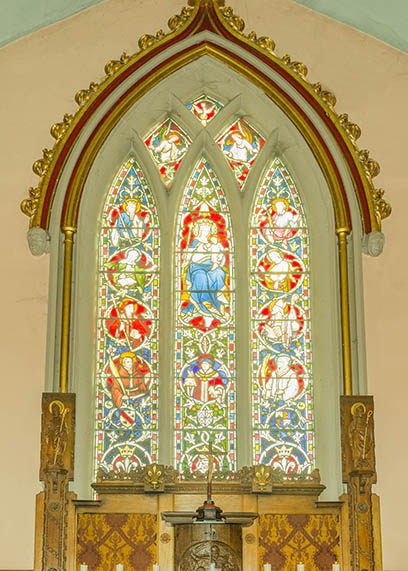 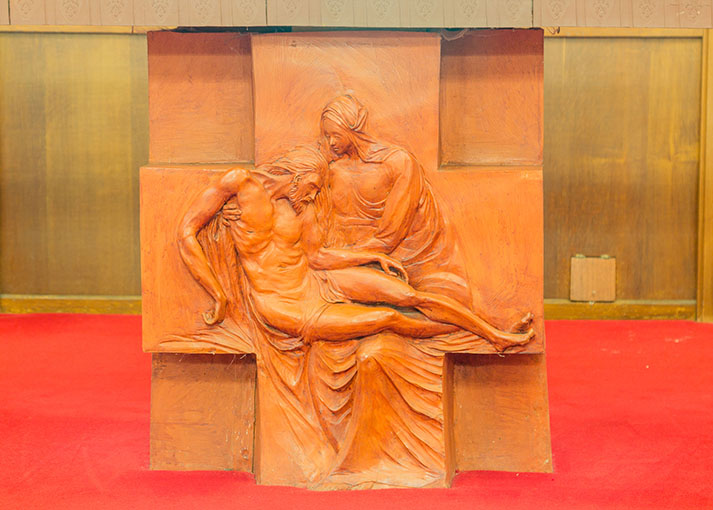 The terracotta altar sculpture, known as a Pieta depicting the dead Christ in the arms of Mary, is by the Maltese sculptor, Carmel Cauchi, who arrived in Britain in 1967. The artist has said, “ Working for churches is very rewarding. For me, it is practising the faith in a different way. It is also a gentle way of preaching.” he produced the Stations of the Cross at St. Mary’s Catholic church at Harborne, Birmingham.

The door of the tabernacle shows the Holy Trinity – the Dove between the Father and the Son, with Jesus holding the cross. 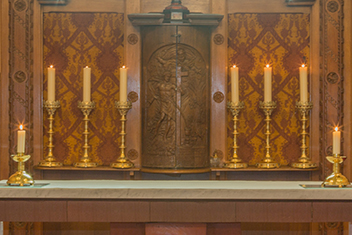 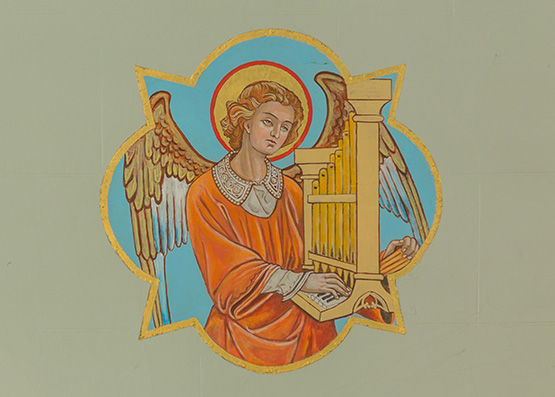 On the sanctuary ceiling above the altar are two angels. These were rediscovered when the church was redecorated at the beginning of the century under the supervision of Fr. David Higham. These were restored by the iconographer, Sr. Bernadette Crook RSHM; the sister of Gabrielle Mercer. 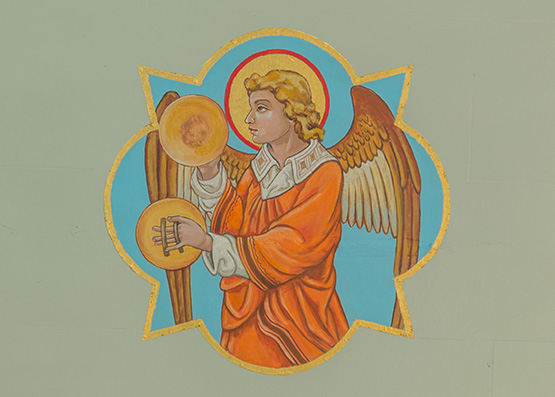 The sculptures of St John Wall and St. Nicholas Owen on the South wall are in the alcoves of the former windows (before the Priest’s house was built). Both were sculpted by Gabrielle Mercer in patinated bronze resin.

St. John Wall who worked as a roving missionary in the Midlands area is thought to have spent some time at Harvington and he was certainly captured at the nearby village of Rushock. He was tried and executed at Worcester in 1679, one of the last priests to suffer the supreme penalty for his faith. The figure depicts the moment of consecration and elevation of the host, the central part of his priestly ministry. The hangman’s noose is already around his neck for practising his faith. His altar server rings a bell to draw attention to the sacred moment of the Mass. 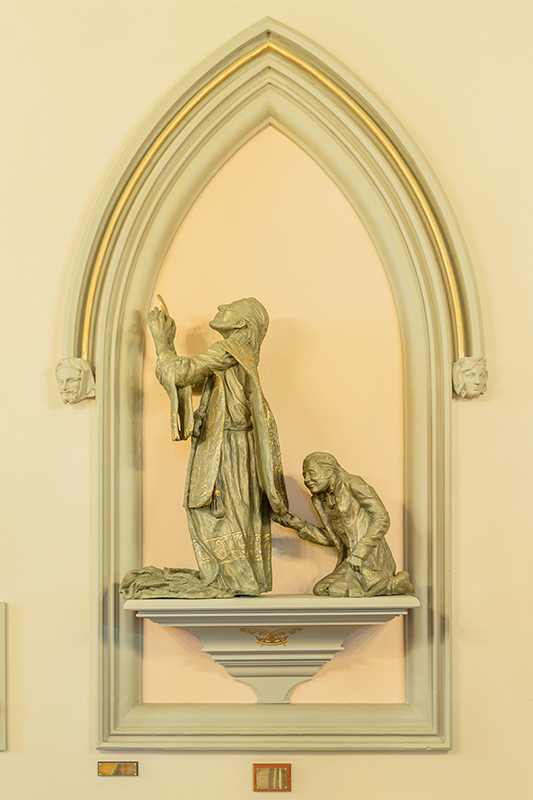 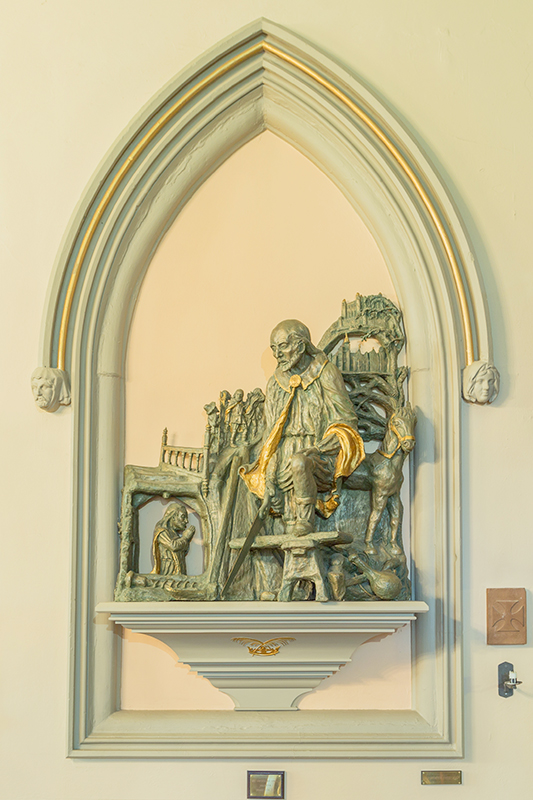 St. Nicholas Owen, a carpenter and Jesuit Lay Brother, constructed hides for priests and sacred objects in Harvington Hall and other recusant houses. One such Harvington hide is depicted. St Nicholas Owen is dressed in the artisan costume of the day, with his cloak and his bag of carpentry tools nearby. The horse is a reminder of his many journeys across the country creating hides in other Catholic houses. High on the right hand side of the statue, amid the branches of a tree, is the facade of the original Hindlip hall, where he was eventually captured with two others, Blessed Edward Oldcorne and Father. Henry Garnet. The four small figures to the left of St. Nicholas Owen show the three future martyrs being taken by a token soldier to the Tower of London, the facade of which is above that of Hindlip Hall. Rodin’s Burghers of Calais inspired these figures. On the extreme left-hand side of the statue, in relief, is St. Nicholas on the rack of torture, where he died on March 2nd, 1606, a martyr to his beliefs and faith. 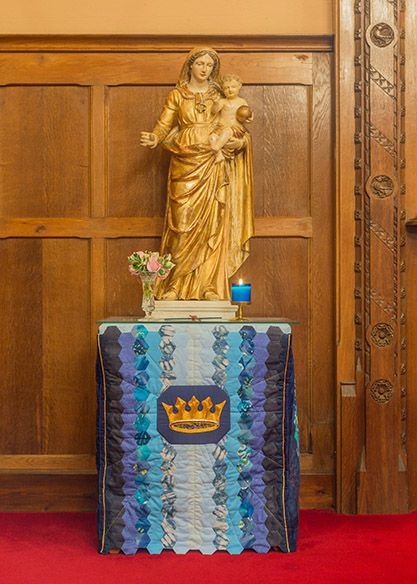 On the side walls of the church are the Stations of the Cross. These particular carvings are Austrian.

At the rear of the church is the Lady Altar. This has been in various positions in the church since the time the church was built. The beautiful statue of Our Lady has remained throughout. 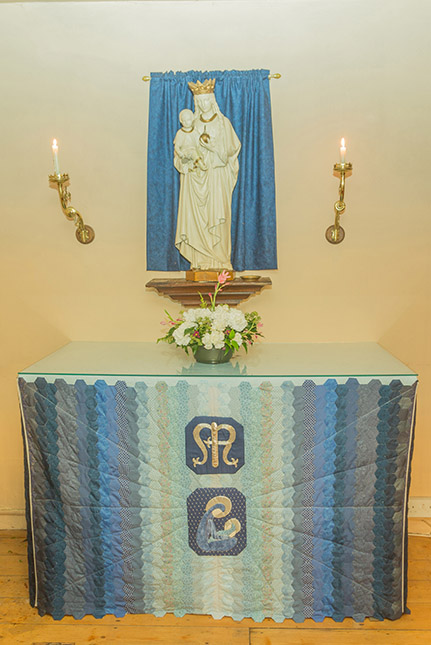