In the 1911 census GEORGE GRIFFIN is listed as 14 years of age and working with his father on their farm in Purshall Green. His younger brother, Thomas aged 11, was at school. His grandmother Sarah had died and was buried here at St Mary’s in 1906.

George joined the Army on 21 February 1916, he was a private with the Royal Warwickshire 1/7th battalion. He was posted for duty on 5th May 1916 and saw service in France and Italy.

On 11th November 1918 the war ended but George succumbed to influenza. He was initially hospitalised in Genoa and from there transferred to Marseilles. Finally, he arrived in the UK on the hospital ship Aberdonia and admitted to hospital in Cardiff. Having been diagnosed with influenza, bronco- pneumonia and pleurisy he convalesced in Cardiff.

George Griffin was medically discharged from the army on 12 January 1919 as it was recognized that he would never be fit enough to re-join the ranks. His pension was 5s 6d a week (ordinary fit soldiers at that time only received 1s 3d a day). This was initially granted for 26 weeks.

The pension was to be reviewed at the expiry of the first award but sadly this was not required as George died, at home, on the 5 May 1919, aged 22. – three years to the day when he was first posted for duty with the Royal Warwickshire’s.

George was buried at St Mary’s, Harvington on the 10th May 1919 and he has a Commonwealth War Graves Commission (CWGC) headstone.

Purshall Green, the address given variously as Rushock or Elmbridge, is off Clattercut Lane on the way to Droitwich. It is within the Roman Catholic parish of St Mary’s but it is outside the parish of Chaddesley Corbett, so George Griffin’s name does not appear on the war memorial at St Cassian’s church. Instead he is commemorated on the war memorial at St Mary’s Church, Elmbridge. This takes the form of a stained-glass window inside the church.

His father Henry died in 1931 aged 68 and was buried here at St Mary’s next to his son – this is the last record we have at St Mary’s. However, his family still continue at the farm. 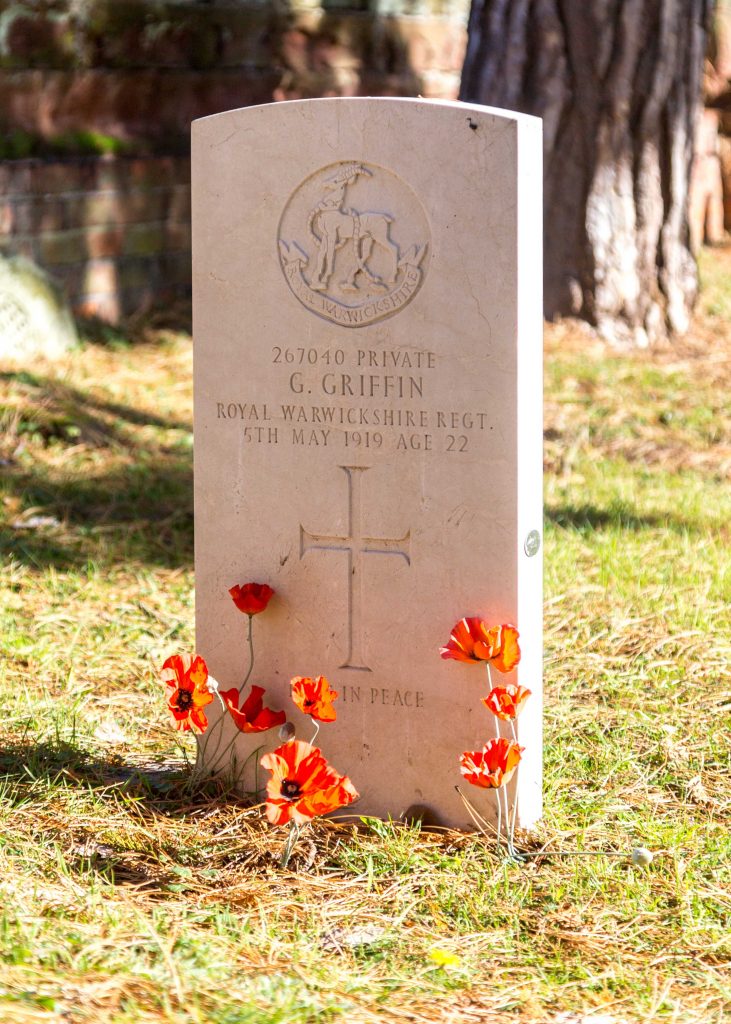